Nokia X20 specifications once again thanks to the new Geekbench list. Earlier this week, The Nokia X10 and X20 features appear online. HMD Global to launch Nokia X20, Nokia X10 and The Nokia G10 Very soon. The company also has an event scheduled for April 8th, where it will unveil these affordable phones. The geekbench list for the Nokia X20 does not really bring new details into the table, but only reaffirms what we already know.

According to the geekbench list of the Nokia X20, as noted MySmartPrice, This phone comes with Snapdragon 480 processor. It is an affordable 5G chipset that is expected to be available on the Nokia X10 as well. In addition to the chipset, the listing shows that the phone is equipped with 6GB of RAM and runs Android 11 OS. Earlier rumors revealed that the phone will get 128GB of storage, which will be available in two color options. 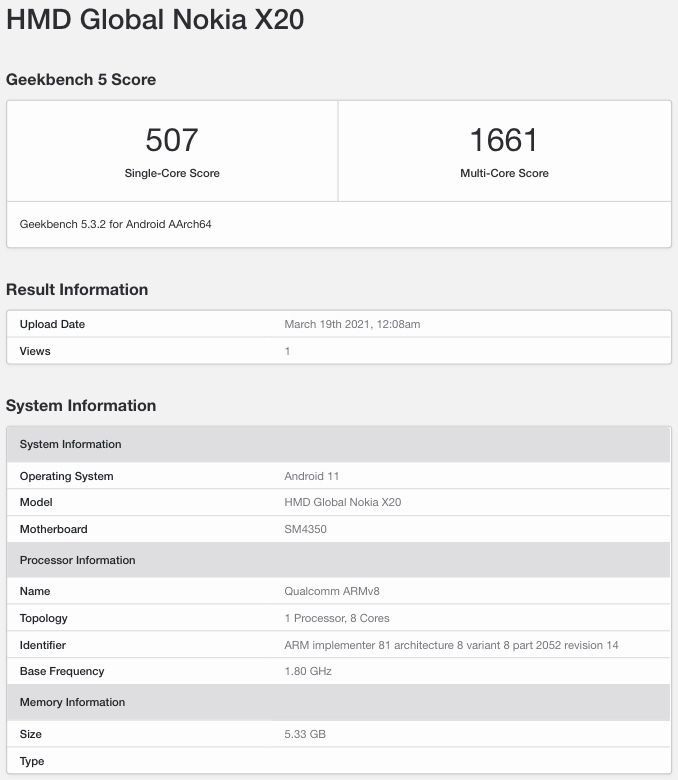 Other Nokia X20 features such as display size, camera configuration, battery capacity, etc. are still a mystery. These new smartphones from HMD Global are mostly wrapped up. However, a recent leak revealed the price of the phone, it said EUR 349 ​​(approximately Rs. 30,000) for the 6GB RAM / 128GB variant. In fact, it is a bit steep for India, and HMD Global underestimates its price.

Features of the Nokia G10 have also recently appeared online. The phone comes with a 6.38-inch HD + display, MediaTek Helio P22 SoC and up to 4GB RAM with 64GB storage. It runs Android 11 just like the other two Nokia devices and has a 48 megapixel quad-rear camera setup. None of these have been confirmed yet, so we hope you take it with a pinch of salt. We need to know about phones in a few weeks.